I love a great botanical garden and explore them whenever I can. If there is a waterfall involved, even better. Visiting Saint Lucia’s Diamond Botanical Gardens was a great treat, with all of the beautiful flowers, exotic plants and of course, the waterfall! 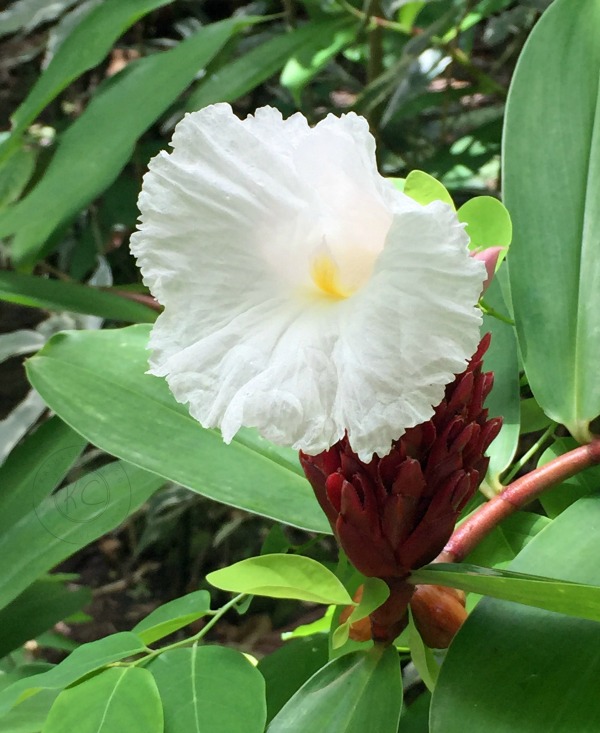 Saint Lucia’s Diamond Botanical Gardens, Mineral Baths and Waterfall is a part of the 2000 acres granted to the 3 Devaux brothers by King Louis XIV of France in 1713. In 1928, Mr Andre du Boulay owner of Soufriere Estate and Diamond Baths excavated 2 of the original baths that had been destroyed by the “Brigands” during the French Revolution.

The baths are fed by the original spring water, similar to the waters of “Aix les Bains” in France. The original holding tank was built in 1784 and is still in use today.

In 1983, Mr du Boulay’s daughter, Joan became manager of the property and began designing and restoring the gardens. 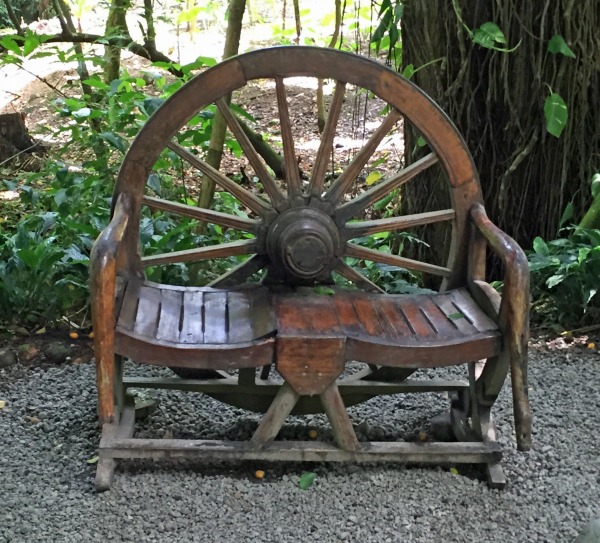 In the Southern Caribbean, Empress Josephine, wife of Naplolean Bonaparte, is quite famous. Each island has their own story of her stay and influence. For example, when we lived in Martinique, the township we lived in, Trois I’lets, is known as the birthplace of Josephine.

In Saint Lucia, the claim is that as a child, Josephine visited the original baths while visiting her father’s plantation called ‘Mal Maison’.

In Martinique, it is said that Josephine wasn’t a very nice person, especially to the slaves and servants at her home. Given this piece of information, which I obviously can’t confirm, I don’t know why she’s such a big deal. She sure is though. 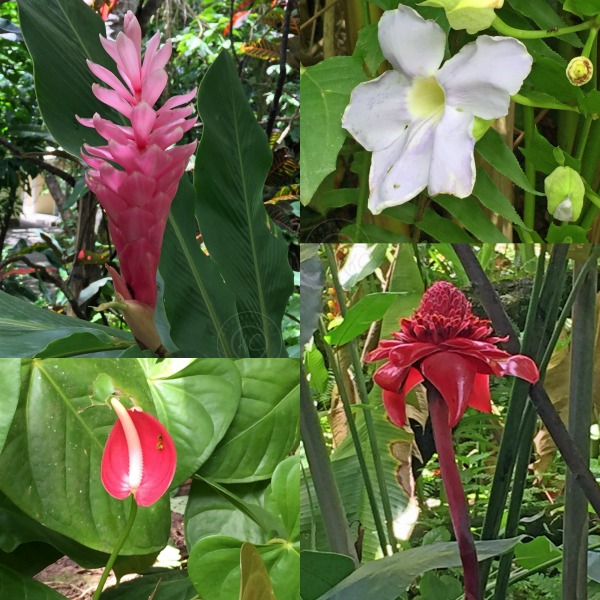 As we walked around the gardens, I was pretty excited to see all of the beautiful and exotic flowers. I’m not sure what they are all called, but they are super pretty. In the photo above, the top right is the Alpinia, the top right is Crepe Ginger, the bottom are called Anthurium Lilies on the left and Etlinger Elator or Red Torch Ginger on the right. Aren’t they just gorgeous? 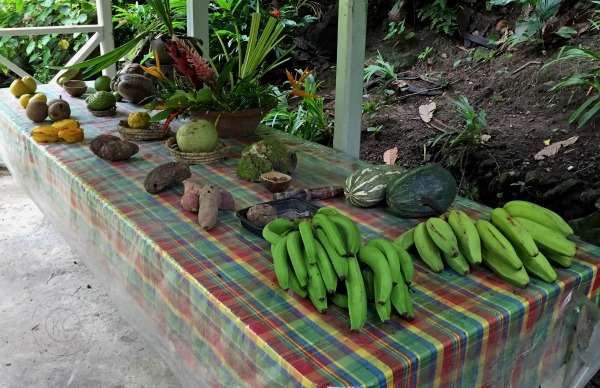 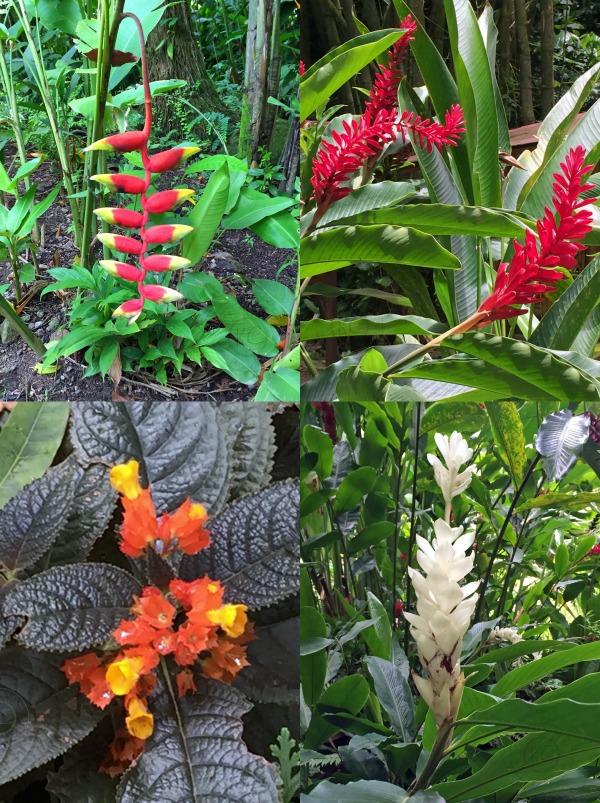 These neat flowers are called Heliconia Plant (top left), Chrysothemis Pulchella (bottom left) and Alpinia (both right flowers). I think they are pretty neat looking. What do you think? The first time I saw the Heliconia was in Belize. 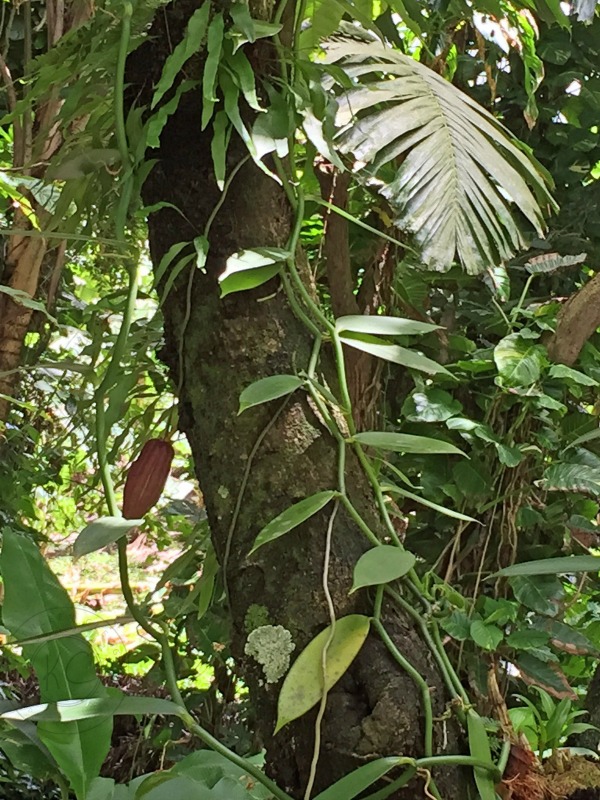 There are some really neat plants that, as someone who loves to bake, I was excited to find. The photo above is of vanilla beans. Did you know it grew on vines that crawled on cocoa trees? It’s the pieces between the leaves where we get the vanilla beans. Each flower is pollinated by hand, before 11am, or the flower falls off unpollinated. Not sure how that works in the wild, or maybe they don’t grow in the wild. 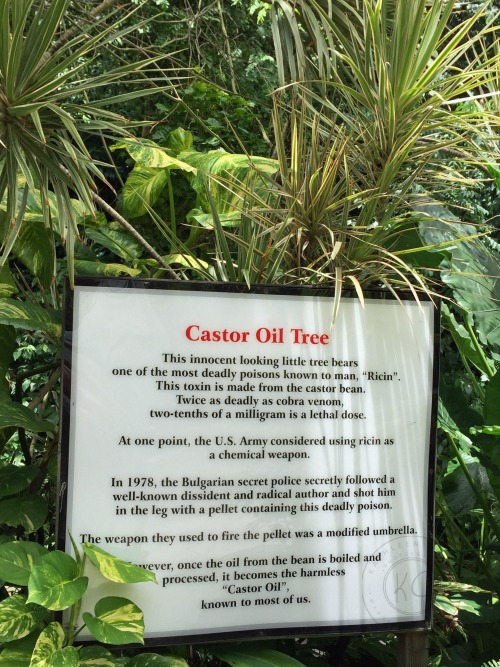 Did you know that Castor Oil came from a tree and is horribly poisonous until it’s processed? Scary stuff. You should read that sign above. I don’t actually bake with this, just so you know. I just thought it was interesting. 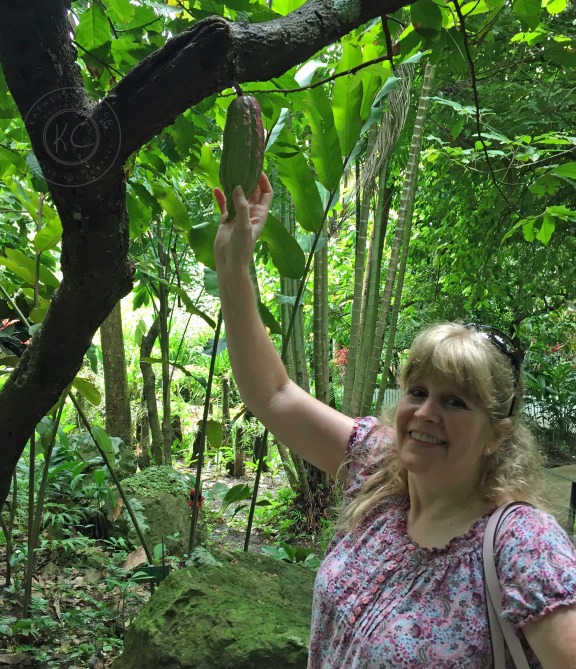 The cocoa tree, which grows cocoa pods right from the trunk of the tree. If you know me at all, you know that chocolate runs through my veins. It’s for this reason that the cocoa tree was a fun tree for me to see. Have you ever seen the inside of a cocoa pod? It’s white and slimy and contains about a dozen beans in each pod. It’s pretty interesting to see how it’s all processed. You should look it up and see it. 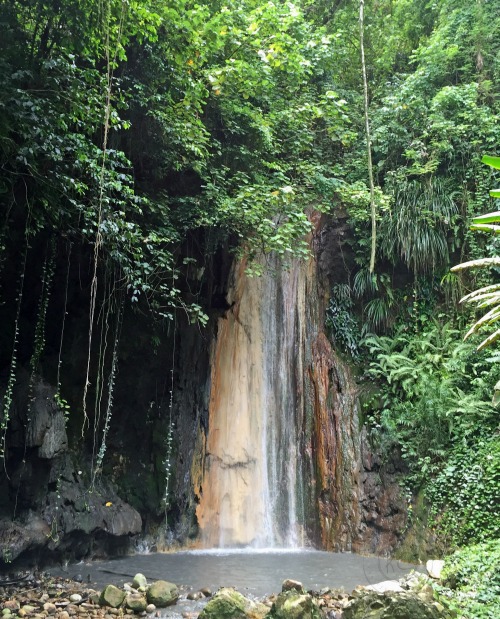 The path to get around the gardens was well maintained and mostly flat. It winds though lots of flowers, the bath area and then to the waterfall. The baths looked really nice, but we had no swimming suits with us, so we didn’t get in. I was wishing we had when I saw the water.

Of course, we had to take a selfie. It was a hot and humid day, but the hike was so worth it. So much beauty at Saint Lucia’s Diamond Botanical Gardens. 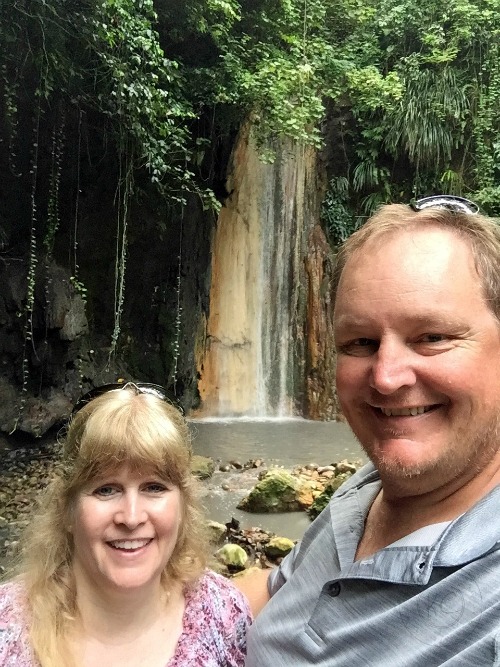 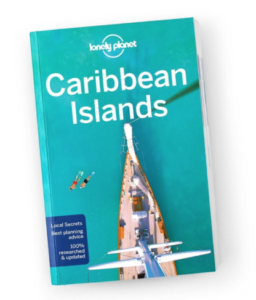 My favorite guide books come from Lonely Planet. Get a copy for your next trip.

Pin this for later! 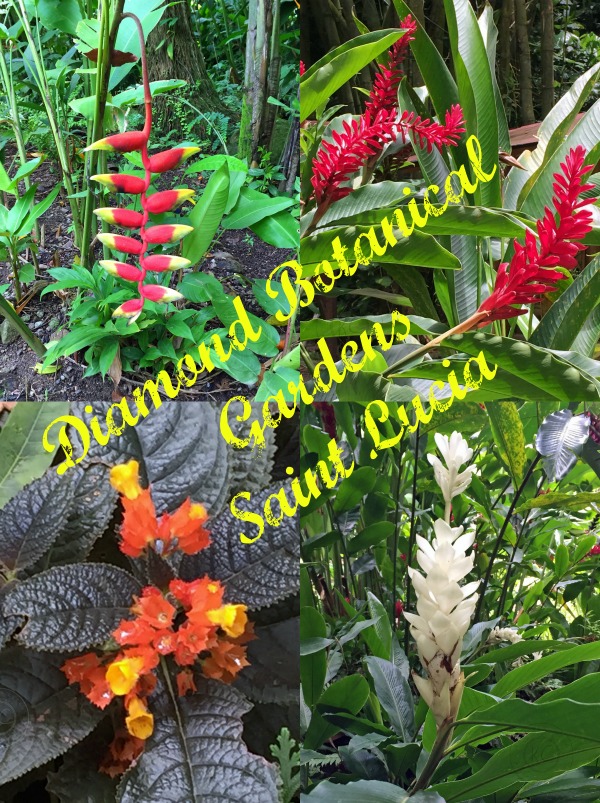 Note: This post contains affiliate links. If you purchase something using my link, I get a small percentage to feed my apparently starving daughter. This does not affect your price at all. 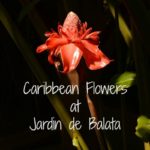 My Top 10 Favorite Restaurants in Martinique

10 Things to Look for When You Visit Martinique

Explore the Quiet Side of Saint Lucia